Sinusitis is one of the most common diseases treated by primary care physicians. However, when symptoms are recurrent or refractory despite adequate treatment, further diagnostic evaluations may be indicated. 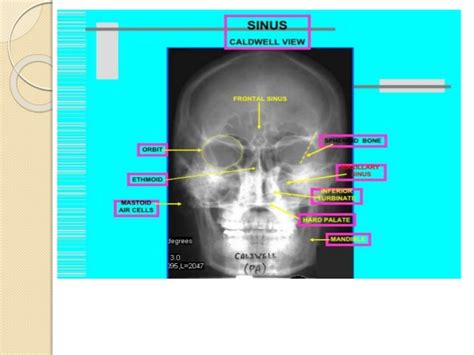 Noncontrast coronal computed tomographic (CT) images can define the nasal anatomy much more precisely. Use of CT is typically reserved for difficult cases or to define anatomy prior to sinus surgery.

Immunocompromised persons and smokers are at increased risk for serious sinusitis complications. Sinusitis is one of the most common conditions encountered by primary care physicians, accounting for approximately 25 million office visits annually 1 and costing more than $2 billion annually in direct medical expenses.

Diagnostic imaging is generally used in cases of recurrent or complicated sinus disease. Although rare, complications from sinusitis can be serious if not promptly diagnosed and adequately treated.

6 Interpretation of plain radiographs can vary widely among different observers, and there is a high rate of false-negative results. 10 Other important limitations of plain radiographs include poor visualization of ethmoid air spaces and difficulty differentiating between infection, tumor, and polyp in an pacified sinus.

Because clinical judgment is sufficient to diagnose sinusitis in a majority of cases, and empiric treatments are inexpensive and safe, only a small percentage of patients who develop recurrent or complicated sinusitis are candidates for imaging studies. Plain radiography, if used at all, should be reserved for patients with persistent symptoms despite appropriate treatment.

CT scans can provide much more detailed information about the anatomy and abnormalities of the paranasal sinuses than plain films. 6, 13 CT scan findings can also be quite nonspecific, however, and should not be used routinely in the diagnosis of acute sinusitis.

2 In many institutions, a limited CT scan costs about the same as a full radiographic series but provides more useful information. Bone window views provide excellent resolution and a good definition of the complete stomatal complex and other anatomic details that play a role in sinusitis.

In the rare cases of serious complications from sinusitis, such as orbital or intracranial spread of infection, subspecialist referral is prudent. Immunocompromised patients are at increased risk for complicated bacterial or fungal infections.

Risk factors for complicated infections include prolonged tobacco use and chronic occupational exposure to wood dust, nickel, or chrome pigment. He has a history of bilateral nasal obstruction and facial pressure pain over a number of years. 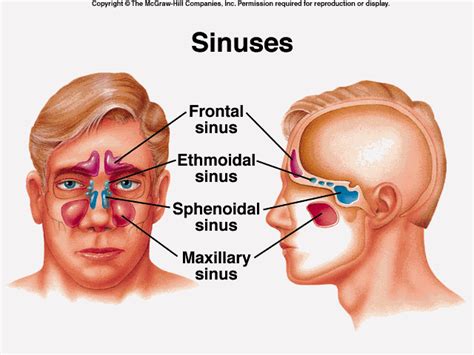 Frontal headaches and purulent nasal drainage have been present intermittently for years. He received multiple courses of oral antibiotics, nasal steroids, and decongestants, with only temporary relief.

The patient was started on a four-week course of broad-spectrum antibiotics in combination with an oral steroid pulse. He continued his nasal steroids and systemic decongestants, and began nasal saline irrigation (recipe: 1 quart water, 2 teaspoons salt, 1 teaspoon baking soda).

After this treatment, his symptoms improved approximately 50 percent, and he received a limited CT scan of the sinuses. The CT scans (Figure 1, part A and C) revealed bilateral pan sinusitis with evidence of polypoid.

He also had a large air cell (i.e., Concha bulls) within the left middle turbinate, which likely contributed to obstruction of Ostia draining adjacent sinuses (Figure 1, part B). The patient underwent endoscopic sinus surgery with improvement of his symptoms. 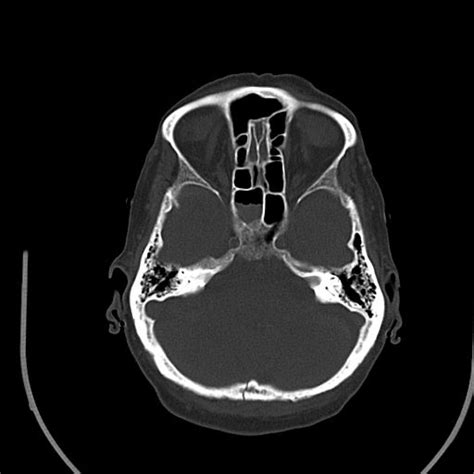 Axial computed tomographic scan with intravenous contrast through the frontal sinuses (bone windows). No obvious bony erosion of the posterior wall of the sinus is appreciated.

Axial computed tomographic scan with intravenous contrast through the frontal sinuses (bone windows). No obvious bony erosion of the posterior wall of the sinus is appreciated.

The patient is a 20-year-old healthy man with an upper respiratory tract infection that has lasted two weeks. He progressed to an acute sinusitis with associated fevers and left facial pressure, pain, and swelling.

His nasal symptoms improved after he started taking decongestants and antibiotics, but a persistent headache prompted a visit back to his family physician. His ears were clear by endoscopy, and his nasal examination revealed a right-sided septal deviation.

Because of the progression of his headaches, a maxillofacial and head CT scan was obtained, revealing acute sinusitis with frontal epidural abscess (Figure 2). After a prolonged course of antibiotics, serial CT scans revealed resolution of the frontal abscess and sinusitis. 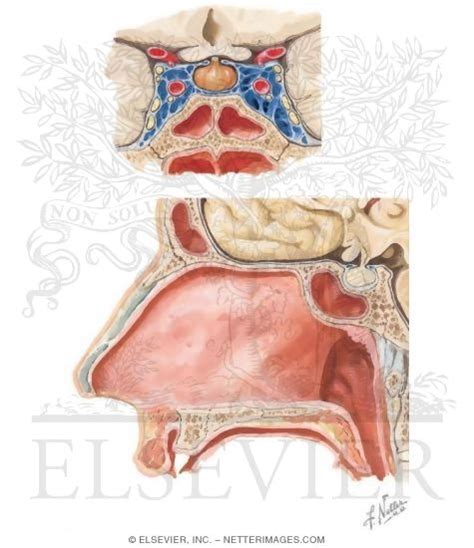 A large nasal mass was seen emanating from the right middle meats with a smooth mucosal surface and prominent blood vessels. CT scan showed a large neoplasm of the right paranasal sinuses with bony erosion of inferior and medial orbit (Figure 3).

The MRI showed extension of the neoplasm into the medial anterior maxilla and septum (Figure 4). An intramural biopsy revealed an adenoid cystic carcinoma of the paranasal sinuses.

He underwent transfacial and endoscopic resection of the mass with postoperative radiation therapy. Axial computed tomographic scan showing a large neoplasm of the right paranasal sinuses (A).

There is deviation of the septum to the contralateral side and extension of abnormal soft tissue into the periorbital and paranasal areas. There is obvious bony erosion of the inferior and medial orbit in the coronal scan (B).

Axial computed tomographic scan showing a large neoplasm of the right paranasal sinuses (A). There is deviation of the septum to the contralateral side and extension of abnormal soft tissue into the periorbital and paranasal areas.

Annual expenses and sources of payment for health care services. Trends in antimicrobial drug prescribing among office-based physicians in the United States.

This material may not otherwise be downloaded, copied, printed, stored, transmitted or reproduced in any medium, whether now known or later invented, except as authorized in writing by the AAF.