Best Xcom Enemy Within Base Layout

First things first: The number and location of steam vents and pre-excavated spaces will be random each game, and the optimal building strategy will depend on that, to a degree. If you can reach a large area of already excavated spaces by extending the lift down, this can save you valuable time and credits early on. 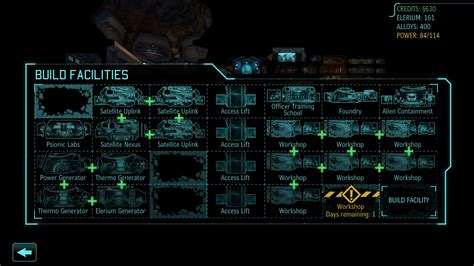 If you want to make full use of the adjacency bonuses provided by the new Genetics Lab and Cybernetics Lab facilities, you will have to prioritize between them, the Officer Training School, Foundry and Alien Containment as you won't have the space to build all of these facilities early on, while leaving enough room to make full use of the adjacency bonuses. There are four types of adjacency bonuses, in descending importance: Additional satellite capacity from Satellite Uplinks and Nexuses build next to each other, Money and resource refunds from Workshops, the Foundry and the Cybernetics Lab, increased research speed from Laboratories and the Genetics Lab, and extra power from the three Generator facilities.

In order to not lock yourself out of Abduction missions completely, you should leave two countries on your starting continent without satellite coverage. If you want to build more than one satellite in the first month, you usually have to construct a Workshop on the right side of the access lift for the additional engineers.

With EnemyWithin, you can now construct either the Cybernetics Lab or the Foundry in the next space, providing you with your first refund bonus, while leaving room to expand downward for a 2×2 or 2×3 grid. Unless you get lucky with your steam vent placement, you will have to build quite a few regular Power Generators as you expand your base.

I tend to build three or four on the right side of the base, and maybe some more on the third level beneath the Satellite Uplink, depending on how early I can get an Delirium Generator. Your base is made up of a number of integrated facilities.

Each facility provides something you need to fight the aliens, be it availability of new research options, the provision of new troop training, or simply the infrastructure you need to continue expanding your base. The base is divided into four subterranean levels, each of which contains a number of available squares.

One facility may be built on each empty and excavated grid square. This will take one-time time and money costs, ongoing maintenance and power costs, and may involve a prerequisite e.g. a sergeant to build the Officer Training School, or a certain number of engineers.

In particular, demolishing the Officer Training School will remove all of its bonuses including squad size until you have built another., It doesn't really matter where, in your base, that 2×2 block is placed (though, to my knowledge, your initial uplink is always in the same spot).

You could probably work one out, but at this point, I think the game is still new enough that any build order would be rather contentious. For example, while we can all agree that satellites are a priority and laboratories are largely worthless (with the possible, aforementioned exception to Marathon mode), after that, things get a little dicier.

For example: do you start right into the Workshops to save on resources, or do you focus on Alien Containment for the research bonuses to help you reach the good equipment sooner? There are pros & cons to each approach, and to some extent, it probably even depends on what you're able to recover from your early missions.

South America is the only other starting location with any decent perk, and it only has two sat locations, making it easy to get. I am playing the game for the first time on Normal difficulty and would like some help on my base layout.

I find it's best to optimize placement, instead of rushing certain things like in COM 1. The rookie training and extra squad size makes a big difference in early survival.

You'll want to spread into the direction of alien facilities rather than going for cash and region bonuses. Proving Grounds tends to have unlimited projects, so you'll want to start early.

Workshop should be finished quite early as it's cheap, low power and effectively gives you bonus engineers. It can help you dig or simply assign engineers to facilities that have to be constantly manned.

Early in the game (PRE armor), your best chance at survival is to keep the enemy from shooting at all. It's better to put those supplies into flash bangs, skills, and guns.

Once you get decent armor, you'll have a lot more 'gravely wounded' people who are not dead. Mid-game, research isn't even your main bottleneck... engineering is.

Mud Muz55811 gold badge55 silver badges1010 bronze badges And as you've probably realized from our COM review, it's brilliant, capturing everything we loved about the original game, but with lots of clever modern ideas thrown into the mix.

After spending many, many hours in the game, I've assembled this guide, collecting all the best tips I can offer to help you deal with the alien menace. Starting again after you've finished it will give you the freedom to plan your base how you like, and ensure you don't lose three men on the first mission.

There are no second bases in Enemy Unknown, so it's vital that you launch satellites and buy interceptors in order to spot UFOs around the Earth. This is why it's pointless to set up in South America, since you'll only need two satellites to do the same job as a whole base.

Conversely, a single scientist can research everything in the game, extra ones just make it go faster. I've never built a single laboratory while playing this game, I've just never needed the speed boost.

If you're dealing with a squad of rookies (often the case if you're an Iron Man player) then I'd go for weapons instead. You can improve experience gain, increase your squad size and make your soldiers more likely to survive.

The only reason not to have someone on overwatch is if you've already spotted the enemy and are busy filling him full of laser death. You can exploit this movement by putting your whole team on overwatch before moving the last man forward, this way if you provoke an enemy, they'll run right into your firing arcs and get horribly slaughtered.

This means that by using a Ghost Suit's invisibility, or the Sniper's Battle Scanner you can spot the aliens while they're still clustered together, and they won't react until you've dropped a grenade right in the middle of them. Still you can often surprise the enemy by simply blowing a hole in the wall with a grenade and making your own entrance.

Please help fight the alien menace by updating or correcting the information on this page. Unlike most places you'll have to fight, you have control over the layout of your base, so design it wisely.

The access lift is always the first unit built, so it becomes the obvious candidate for this single point of entry. At higher difficulty levels, alien retaliation can often come MUCH sooner than you might be ready for-- before you have base defenses built, and before you have powerful weapons to arm your troops with.

Considering that the access lift and all hangars serve as entry points for the invaders, the starter base has all the defensive virtues of a screen door: The hangars and lift are distributed as widely as possible through the base, giving the aliens a wealth of breach points and enabling them to assault any defenders from all sides.

Dismantling the existing modules however accrue base maintenance costs of $720,000 per month due to the Paying For Dirt bug. The above base is designed to work like the popular defendable base layout, but also provides a second access point into the hangars.

If you really like to use rockets but can only handle aliens entering the map through one entry point, consider the following variation. It may take a while to re-order the base in this manner from the starting setup, but the end result provides you with a clear firing corridor into the hangars with plenty of cubbyholes to hide in.

One disadvantage of this base however is that if the workshop suffers too much structural damage, all facilities past the small radar will be destroyed as they'll be disconnected from the access lift. No matter what layout you eventually use, remember that the more complicated it is the longer it may take to construct and the more money it will cost.

One drawback of the above design is that it takes 52 days before all the facilities in the “choke line” are completed and the base is fully defensible against invasion. Moving the hyperwave out of the choke line also makes it less likely to be destroyed by a stray blaster bomb.

The following designs are an attempt to greatly speed up build times without sacrificing much (if any) defensibility. Notice that the General Stores above the Access Lift is the only facility that has been removed if you did not build the Radar, so if you are paying for dirt, you will not suffer greatly.

Note that if you expect to be attacked within a short period of time, you may not yet have swapped your choke point from the Access Lift to the General Stores on the left. You would of course want to add another Living Quarters if finances permit (don't forget to staff your Laboratory or Workshops).

I place scouts/spotters with a motion detector in the rooms and round the corners of the corridor of general stores. The ideal case is to have your choke point aligned vertically on the base grid, lined with general stores.

The general stores have large, double wide doors that open out onto the vertical corridor. These doors will give your troops and tanks cover, and let them pop out to make attacks at will.

It is also desirable to have a base facility containing a door directly facing the Access Lift (such as the Hyper-wave Decoder). A scout can pop out at the beginning of a turn and spot units coming down the corridor without risk of being shot due to the “mutual surprise” rule.

Other units with indirect-fire weapons (grenades and blaster launchers) can then safely attack the spotted alien(s). Improper placement will often end up forcing you to cut through the very tough walls and dirt blocks with heavy plasmas or tank lasers.

However, with proper placement of modules, the sealed off walls can be very advantageous in controlling the flow of aliens. XcomUtil users cannot take advantage of this as the setup tool for this utility automatically rips out the walls.