For many fans of the merry mutants, the show was their introduction to the characters and the stories that have made the X-Men so successful in the comics genre for decades. X-Men : Evolution was targeted at a younger audience than its predecessor, but that doesn't mean it didn't delve into the social and political aspects of the X-Men that have made the comics and characters so iconic.

When it becomes clear that Mystique had tricked Rogue into thinking that the X-Men had attacked her, the young mutant makes her choice and joins Professor Xavier's team. This episode acts as something of an ending for the first major storyline of X-Men : Evolution, with the team coming together now that Rogue has joined in.

The episode also serves as an important moment for the relationship Xavier has with the younger X-Men, as they learn that he has been keeping information from them that affects their lives. Believing that Wolverine has been taken by Magneto, Professor Xavier invites the Brotherhood to join the X-Men to train in the Danger Room so that the two teams can be prepared to work together to deal with the Master of Magnetism when he attacks.

In the Season 1 finale, Magento holds a series of battles to decide which mutants are worthy of joining him on Asteroid M, whether they want to be a part of his team or not. One of the mutants who is offered a place at Magneto's side is Cyclops, and for the leader of the X-Men, the decision is more difficult to make than he would like to believe.

With the two teams formed, the X-Men go up against Magento's Acolytes, with Scott Summers' loyalty torn between Professor X and his friends or the Master of Magnetism and his brother Havoc. After learning that her new friend Risky is actually Mystique in disguise, Rogue suffers a mental breakdown and her latent multiple personality disorder emerges.

Now that the world knows that mutants exist, Storm and Beast go before the US Senate to try and calm the fears that the country is dealing with. Along with finding the missing Professor X, the footage of the X-Men saving lives makes it clear to the world that they are not the enemy. 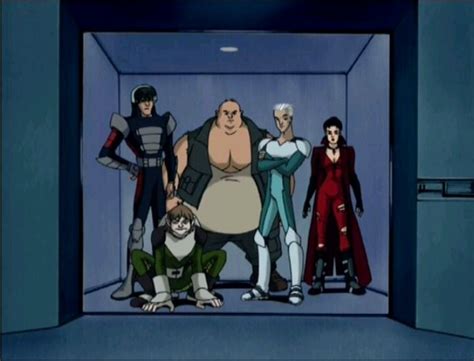 This episode sets up the new status quo for the series and also plays up the rivalry between Wolverine and Cyclops that will continue. The Season 3 finale, “Dark Horizon Part 2” sees the X-Men, Mystique's Brotherhood, and Magneto's Acolytes come together hoping to stop the resurrection of Apocalypse.

In the Season 2 finale, “Day of Reckoning Part 2”, the X-Men and the Brotherhood have teamed up to try and stop Magneto from revealing the existence of mutants to the world. At the same time, Wolverine is busy battling Bolivar Track's Sentinels and the New Mutants are fighting the defenses of the Xavier Institute that Mystique set off.

This two-part story really kicked the series into the next gear, setting up storylines that would pay off across the next two seasons, and bringing a lot of tension to everything that follows it. To give fans a clue of what they had planned, the series ends with Professor X revealing the visions of the future he saw while he was controlled by Apocalypse.

Derek Barack (352 Articles Published) Born and raised in New York, Derek Barack moved to Los Angeles in 2001 where he worked as a freelance writer before taking a position at Activision where he worked on many successful franchises including Spider-Man, Tony Hawk and Guitar Hero. Since joining SPE, Derek has worked on Man vs. Wild: The Game and the film Sucker directed by Michael Manasseh.

Of course, following a huge series like that was never going to be easy, so when X-Men : Evolution hit the small screen, it featured a much different take on the X-Men that took the team back to high school. The third season's “Blind Alley” featured Mystique taking revenge on Cyclops by abandoning him without his ruby quartz visor.

The series was still finding its footing and the X-Men vs the Brotherhood weekly engagements were tiring at this point, and Forge's introduction failed to sizzle. The episodes introduced Scott Summers' brother Alex Masters/Havoc into the series while also evolving characters like Sabre tooth and Mystique using Magneto's genetic enhancement device.

The episode follows Scott's attempts to rescue his lost brother while the rest of the mutants at the mansion deal with a snow day. While we're big fans of the Summers Family and enjoyed seeing the newfound brothers get to know each other, the episode forced a sense of dread that never materialized while filling time in between the season's exploration of new members of the X-Men.

The episode gave Spoke a chance to stand up for his “Auntie O” but it didn't do much justice to Storm, who had played such a large role in the previous X-Men series. This may come as a controversial choice as there are some great elements to the second season episode “Retreat,” which followed Hank McCoy's introduction and transformation into the blue-haired Beast.

The loss of his former life weighed heavily on Beast, so Professor Charles Xavier suggests a field trip with a few students to clear his head. The deeper exploration of Beast's transformation is handled well, but the Bigfoot storyline along with the overdone troubled class of students coming together detracted from McCoy's development a bit.

Mystique sees an opportunity to get a spy in Xavier's institute when the morally shady Todd Polanski starts exhibiting mutant powers. She tries to ignore it, but finds that hard when she's approached by Jean Grey and a mutant troublemaker, who both say they know what she's going through and want to help her.

A news report from the Canadian mountains triggers something deep inside Wolverine, and he starts having berserk fits. Loosely following the main stories from the original comic, X-Men : Evolution accompanies the lives of six mutants (Cyclops, Jean Grey, Nightcrawler, Shadow cat, Rogue, and a new original character named Spoke) who attend Xavier's Institute for the Gifted, where they ought to learn how to control their powers and use them for good.

The four teams fight a losing battle against their horsemen, until Apocalypse moves his plan to the next level. The tops of the pyramids come off and line the Earth's atmosphere, connected to each other by some sort of energy.

The Brotherhood joins the team in Mexico to fight Magneto, and Jean amplifies her power with Cerebra to battle Xavier psychically. Apocalypse lies down in his original resting place, and the evolution of humankind begins.

Apocalypse is shut into his machine and sent to another time period, and the horsemen fall out of their trances. Rogue and Kurt give Mystique the cold shoulder, and the episode ends with Xavier deeply disturbed after seeing glimpses into the future of the X-Men, and seeing Jean become the Phoenix, among other changes.

As Jean's and Scott's graduation day approaches, Rogue suddenly leaves the mansion. Xavier starts worrying about the existence of mutants becoming public knowledge when the media starts reporting multiple sightings of a man with angel wings.

With most of the X-men on Christmas leave, and Cerebra down for repairs, Scott and Rogue are left having to track the man down themselves. As all the monsters in the tomb attack, the teammates fight to survive and find a way out.

After being grounded for reckless behavior during a training mission, Tabitha doesn't need her father showing up asking her to steal money for “"her mother”"... A malfunction in Juggernaut's stasis field leaves the X-Men without adult supervision.

Deciding to hold a party, they ditch Scott and Jean in the wilderness. However, things soon get out of control, when one of the guests gives himself access to Cerebra.

Forge is working on a device that will enhance Kurt's teleportation powers. Rogue and Wolverine duck a squad of soldiers when the nationwide alert goes out against mutants, while Storm and Beast go into a meeting of Congress to defend themselves.

Magneto steals the remains of the top secret “Rebirth” project, a project Wolverine helped shut down all the way back in World War II. Mystique breaks a mysterious young girl out of an asylum and brings her to the Brotherhood House.

When a new sphere appears in Egypt, Professor X wants to try to communicate with Apocalypse, taking Storm with him. With Cerebra technology, the rest of the group watches as Apocalypse telepathically communicates his plan to awaken the dormant X gene in all humans, a process which will kill most 'normal' humans.

The kids get worried when the normally cool and collected teacher Hank McCoy starts having fits of animal rage. Mesmer mentally controls Gambit into stealing half of the Spider Stone from Angel.

When Jean and Mara feel like the boys think they are stronger than the girls are, Tabitha decides that they should form a girl's crime fighting club as the Danville Sirens. During the rebuilding of the manor, Kitty and Kurt intercept a bunch of graffiti artists disguised as monsters.

The older students get to go back to Danville High for one day before attending a hearing to determine their ultimate fate, while they are banned from using their powers. Evan enters an extreme Skateboarding competition, and puts his skills to the test.

Scott and Rogue end up on a geology club field trip together. Rogue finds the two meeting, and Agatha tells her that she's the only one who can save her mother.