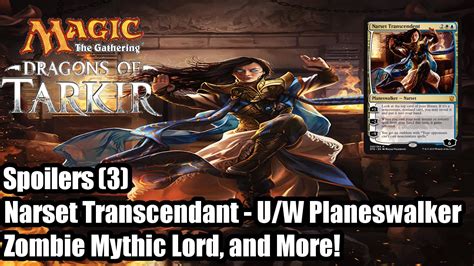 While not all zombie decks possess blue, those that do have the benefit of being able to include the enchantment Rooftop Storm. It is not uncommon for a zombie -tribal player to win a given game within a turn or two of playing a Rooftop Storm, so be prepared to have a target painted on your back as soon as you cast it, as the other players will likely band together to try to stop your ensuing zombie onslaught.

Basically, Piraeus is a bulky but powerful, hard to block tank who grants your non-humans a free revival, and his legendary status makes him available as a monoblack commander in EDS. Noxious Ghoul's 3/3 stats are disappointing for his hefty chunk of five manas, but when he or another zombie enters the field, non-zombies get -1/-1 for the rest of the turn.

Diagram's downside is that she enters the field tapped, but without haste, creatures won't be able to attack on their summoning turn anyway, making Ghoul an excellent first-turn play. Admittedly, minions are a fairly rare type; as of this writing, there's only about 40 in the entire game, but it's still a helpful boost since most belong to the black faction.

Normally, discarding is a disadvantage, but it's a quick way for zombies to fill your graveyard, and the token creature will stave off attacks in the meantime. Crypt breaker also lets you tap three of your untapped zombies and lose a life to draw a card, adeptly replenishing your depleted hand.

The first product I ever got was a Legions' starter deck featuring these lovable dead. After a long time of being out of Magic, I learned how non-Standard formats work and zombies have been the one tribe I’ve wanted to see be good at the highest levels.

While most of the list comes on with some newer additions, I think I’ve learned that Zombies are extraordinarily difficult to pilot well. A lot of the newer additions have opened up lines that make zombies much more than slam and spam.

While I normally try to stay mono color for budget, zombie support outside of black is fairly lackluster and scattershot, so zombies naturally work best for me at mono black (I’m not the type to make color splashes exclusively for sideboard cards). We also open up some tricks we’ll hit on when we get to the relevant cards.

Smuggler's Copter for quickly board rebuilding and evasion. There’s a ton of small interplay between our cards that can make or break games.

And while it doesn’t enable what Carrion Feeder does, it is still absolutely bonkers value availed to a one drop. But when we get into stall positions, or we can’t push past big dork, we can tap our crew to dig for removal or whatever else we may be in need of.

But Diagram Colossus and Undead Augur go bananas with this combo out, making a token and/or drawing a card respectively for one black MANA. God forbid they ever print a black color shifted Kirk Prospector.

Feeder also give us instant speed death triggers on Relentless Dead meaning instant speed reanimating if you manage your MANA appropriately. While it isn’t an exactly color shift of Arc bound Ravager you can still do tricks combat stuff where you sacrifice all your block guys that would die anyway into the Feeder to take down whatever is in front of it.

Feeder + Relentless Dead is this deck’s version of the Falkenrath Gorge + Stroking Condemned combo in that this is how you play around traditional creature casts. Later Reader looks dumb but there is actually a lot of value in splitting the body.

The last ability is absolute gas, especially with Carrion Feeder giving it instant speed. Maybe you want to sacrifice the Dead to Feeder to get a Death Baron and smoke your opponent’s team.

A common question I get is whether we risk killing ourselves with the combined life loss of Augur, fetches, Crypt breaker, and Castle Boatswain. Augur on the other hand can give us lots of cards, but can cut into your life a bit.

Not terrible at stretching our presence against opposing aggro starts. I simply find Reaper’s activation cost to be a bit pricey.

Considering we have Vial and a relatively low curve as it is, I would prefer getting our stuff back rather than exile it for generic tokens for board presence. While we could go basic and slam another lord in these slots, I wanted to go in a more creative route.

We want to get to more of a mid-game state where we can make him a big boy. But most importantly, it gives insane value to the Grave crawler + Carrion Feeder combo, spitting out a 2/2 for each black MANA spent.

Death Baron is our primary lord and absolutely hoses opposing aggro starts. I don’t really care to review how I have the current sideboard set up so much as talk the various options that can be accommodated by the build for various metal.

Damping Sphere is an easy choice for Tron and Amulet style decks that can build their MANA quickly. Full sets of Nurturing Peatland and Silent Clearing.

Undead Augur compliments those Canopy lands to offer massive draw potential. That they gave Modern zombies this on top of Carrion Feeder to trigger it blows my mind.

Control opponents with cast wrath through gritted teeth as you refill you hand. Regardless of my opinion on Modern Horizons as a set, Zombies may have gotten a bigger push than any other existing deck.

And a cycle of lands that gives zombies the means to really play a long game, something they already are known for. I don’t believe zombies will be some new monster to the format, but I think they have the pieces to make a competitive presence.