I remember leveling in Mandarin some time ago with my old character, and I got bored in The Jade Forest when I was required to control another character (the quest was named SI:7 something, I believe). Then I decided to go to Kristang Wilds, and that zone was pretty good.

Then I remember going to another zone (maybe Valley of Four Winds) where I had to have dinner with Pandas, collect flowers, throw watermelons, and also such wood… and that was too much for me! Dread Wastes quests mostly revolve around fighting the Klaxon.

Some Andean zones seem to have more scripted entry requirements to get quests. If I started a character in Mandarin at 80, I couldn’t pick up Half Hill quests until 81.

To start Dread wastes, you need to do a chain starting with Bow Mistress Li that you can get by either doing the mantid invasion quest in The Valley of the Four Winds or the Gummy quest line that has you travel for them through Kublai Summit. I got exalted with the Anglers long ago for their water walking mount and picked up the account bond item at revered that increases their rep rewards for all characters on the account.

Elemental Lord Run Lie had some of the more memorable and fun quests and I always think back fondly of my time in that zone while leveling on launch day. Stood in the Fire I liked the visual aesthetics of Valley of the Four Winds, but I didn't like the quest content.

I enjoyed most of Jade Forest, except the very early quests as you come over from EK/Salvador, it also looks pretty nice. I felt Kristang was nicely designed and the quests were fairly engaging, but not my favorite. 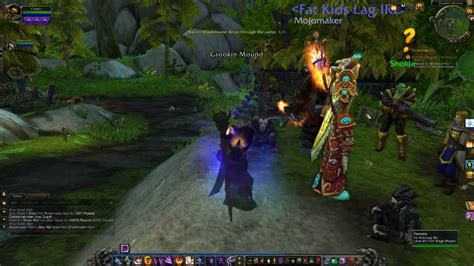 Dread wastes is my least favorite area, it's a bit dark and depressing for me... and I ran out of quests there the first time round before I learned to stick to Run Lie and Town long until you've exhausted the XP sources there! Town long Steppes is quite a pleasing area visually, but nothing there stands out to me.

Pre-invasion Vale of Eternal Blossoms was the best looking area in the game and I actually enjoyed the Golden Lotus dailies and grinding opportunities more than most (Realm First Andean Ambassador FTW! ) Wasn't a big fan of Isle of Thunder, although I did quite like the new dailies as an alternate source of Lesser Charms, mixes things up a bit.

I think Blizzard did a wonderful job this time round; obviously not all of it was perfect for me, but I felt that the overall area design, questing experience and music was of very high quality in Mop Pre-Invasion Vale wins for me, I think, with Kublai a close second. The Unstoppable Force Vale of eternal blossoms after Parrish added some decorations.

Elemental Lord Valley of the four winds is just beautiful, especially when it rains! The Unstoppable Force Old Vale was prettiest, IoT was the most fun in terms of playability, KW had some of my favorite leveling quests. 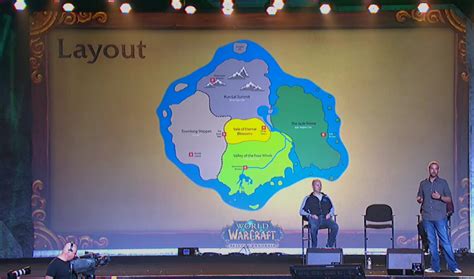 Blade master My favorite zone of the whole expansion was actually the Wandering Isle, but for the best in Mandarin I'd go with the Jade Forest, I really love how detailed everything is. It would have been Kublai if the whole zone was similar to the mountain region, but the Korean Tundra style plains really ruin it for me.

Light comes from darkness Still Na grand and Salazar Basin to be honest ^^ But in Mop I find Vote the area I like the most due to its extension and how much sky you've got there. Tho it comes paired with Run Lie. Herald of the Titans Jade Forest, though I find aspects I really enjoy in pretty much all of them.

That said I went for Run Lie because I loved the mountainous upper half of the zone. Scarab Lord Jade Forest, it felt the best polished.

The Light bringer I loved Dread Wastes, the Klaxon were brilliant. The finale quest for the Klaxon was great as well and all the little dialogues between the various Paragons back in base is comical.

I don't understand how people can like Valley of the Four Winds, what's enjoyable about seeing house-sized vegetables and essentially being everyone in the zone's lackey while you clear up the various menial farmhand jobs? The Klaxon story was brilliant, far surpassed anything in the prior zones. 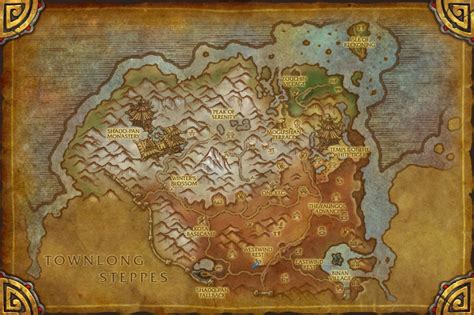 Although this scaling feature is enabled by speaking to Chrome within Grammar or Storm wind, characters aren't limited to a single expansion and can switch at anytime for specific storylines or to mix up the leveling process. Players going through the Classic and Cataclysm zones in Salvador will experience stories centered around the Night Elves, Drained, Orcs, Lauren, and Trolls.

Players must find the Pillars of Creation, seal the Tomb of Sarges, and invade Argus to end the Burning Legion's threat once and for all. While everyone still levels quicker than ever, the scaling update ensures players can finally see some World of Warcraft's greatest storylines in their entirety rather than having the journey cut short.

Home of You'Lon the Jade Serpent, one of the August Celestials that watches over Mandarin, this is the first zone level 85 players will enter. The Horde and Alliance start off on different areas, à la Korean Tundra and Howling Fjord, making sure quests aren't either mobbed when there's heavy foot traffic in the zone.

Adventurers from both factions have to deal with being marooned on this “undiscovered” continent; the Alliance expedition is shipwrecked, whereas the Horde has crashed their zeppelin. Chris Met zen pointed out that you don't land with an unending supply of troops; your faction has a pretty small group, basically a single platoon, that you get to know over the course of the adventure.

Jade Forest has several intelligent (well, we'll get to that in a bit) indigenous species besides Andean, and each faction chooses one with whom to ally themselves. The Temple was constructed centuries ago as a monument to when the last Andean emperor vanquished the SHA of Doubt. 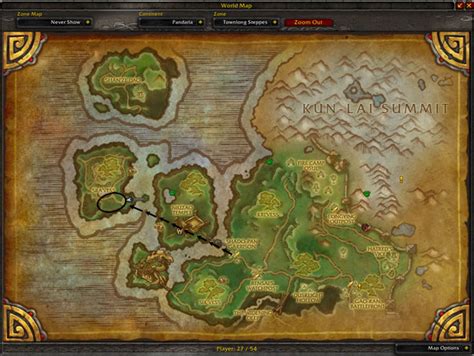 Now, the Andean are building a statue of the Jade Serpent, as seen above ... that is, until you jerks come along and mess everything up with a battle that ends up destroying it. The Temple of the Jade Serpent instance is where you try to fix what you've done. Stockton mentioned in the preview that a design goal for Mop was to make factions more than a mandatory grind for a piece of gear.

These beautiful, Chinese-style dragons exhale cloud breath (the effect reminded me a LOT of Wind wakers, in a good way), and the Order is more than happy to train you to ride one -- provided, of course, that you can pass their tests. Alliance players in Jade Forest can also look forward to a quest line involving SI:7 agents trying to locate the missing “White Pawn” -- none other than Indoor Wynn, who happened to be aboard your ship when it wrecked.

Magical waters that flow from the Vale of Eternal Blossoms in the north cause the fruits and vegetables planted in the valley to grow to enormous size -- a real boon for the epicurean Andean. Each Brew master is on the hunt for special ingredients for his beer, and when you run into them while traveling, each also has an associated Eve scenario.

Well, there are apparently a few reasons: drunk knife-fighting monkeys, rabbits in the hops, hungover ancestral brew master spirits, and, of course, beer elementals. While it's not necessarily true that you won't run into more serious threats in the Valley of the Four Winds, as a Blizzard rep said, “I've saved the world a bunch of times.

The Kristang Wilds were originally a small subzone of the Valley, but the design team members eventually found themselves falling in love with the area and wanting to give it a life of its own, so they vastly expanded its terrain and made the Wilds an entire zone. The first is introducing you to the mogul, the race that enslaved the Andean thousands of years ago and was eventually overthrown. 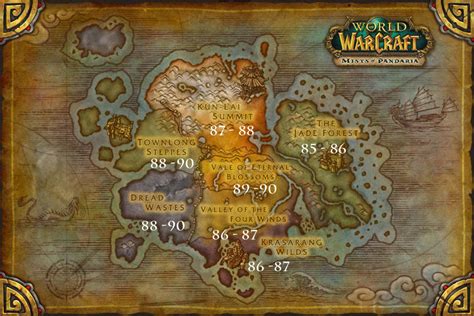 Kodak gave us a fly-through of one of the mogul ruins, giving us a good look at the race's model. The White Tiger, Xuan, is the August Celestial that watches over Kublai Summit, the northernmost zone in Mandarin.

They've been forced out of their home in the nearby Town long Steppes by the mantid, the humanoid mantises we saw at Blazon, and they figure they'll just take up residence in Kublai ... even if the Andean already live there. High in its peaks lies the secret order of Andean that protect the continent from its most powerful threats: the Shadow-ban.

The Shadow-ban Monastery, home of the Shadow-ban and the White Tiger Celestial, doubles as a quest hub and dungeon, where players will need to assist the Shadow-ban in keeping a dark secret. The best part of the Shadow-ban experience, though, is that they're a full-fledged faction, offering players the ability to move through their ranks and become an elite Shadow-ban warrior themselves.

“And they have pretty cool armor, which we couldn't show in this build -- but trust me, they look awesome,” Kodak said. We don't have any screenshots of the Vale of Eternal Blossoms, the level 90 zone that Stockton describes as “the heart of Mandarin.” It was the original seat of the mogul empire, where they harnessed the power of the Vale's magical waters to rule the continent with an iron fist.

It's also a playable dungeon. Now that the mogul have returned, along with several other forces (such as the Horde and Alliance), the Vale is in more danger than ever, and it's up to you to keep it safe. You'll team up with the Order of the Golden Lotus, the Andean chosen by the Celestials themselves, to protect the Vale. 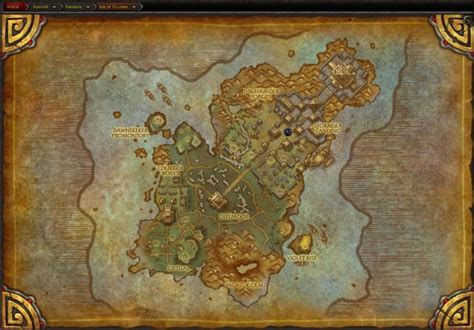 “They won't send new guys right to the front lines right away; you'll be working in several parts of the zone, ” Kodak noted. It's not just a bar that fills up at the bottom of your screen -- each new reputation rank unlocks new story quests which conclude their arc at exalted level.

The Vale is also home to the Lore walkers, the faction of scholars who keep track of all the lore of Mandarin. They've begun setting up their archive in the Vale for posterity, and they'll task you with bringing artifacts and lore objects to them.

In exchange for this, the Lore walkers will regale you with tales and performances related to the history of Mandarin on the stage in their sanctum. “We've got thousands of years of history we want to share, and this is a great, totally optional way to do it,” Kodak said.

The Steppes weren't presented to us, but they're where the mantid, the infection species that has a thousand-year cycle of aggression with the Andean, accidentally awake a hundred years early. Players will need to travel through both zones to discover what caused the mantid to awaken, what's controlling them, and what can be done to stop them.