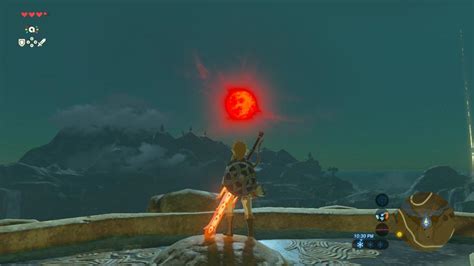 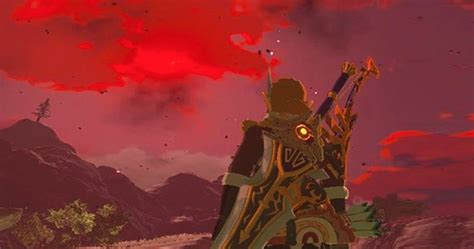 Blood Moon Game(s) Breath of the Wild Location(s) Rule Kingdom Blood Moons occur at midnight on nights when Calamity Ganon's power reaches its peak and escapes from Zelda's control within Rule Castle, dyeing the night sky and the Moon red with Malice. The effects of this Malice revive any fallen monsters and enemies, returning them to where they once were prior to being slain.

In addition to reviving enemies and Over world Bosses, Ore Deposits are replenished, and Materials ranging from plants and trees, to gear left lying in the field, effectively respawn, allowing Link to collect them again if the ones he took before the Blood Moon broke in the interim period. Mechanically, Blood Moons are a way to refresh Breath of the Wild's long-term memory and appear to purge the game's cache.

Consequently, data stored within the game's long-term memory is reset, including the presence or lack thereof of Materials and Weapons. Blood Moons do not affect things handled through short-term memory, such as Creatures, Grass, Trees, and Barrels.

Blood Moons can be initiated by overloading the long-term memory through slaying monsters and enemies, visiting several locations, Sitting past midnight at Campfires and Cooking Pots, sleeping past midnight at Inns, or by playing the game uninterrupted for three real-world hours. Blood Moons can be interrupted by entering specific areas such as Ancient Shrines and Rule Castle before midnight, though they will simply appear again the next night.

When the console is using 90% or more of its system memory, a panic Blood Moon can be triggered as part of a garbage collection routine. 1.0 1.1 Whenever the clock strikes midnight on unlucky nights, the sky turns blood-red.

The first and primary reason a Blood Moon appears is so the game can revive any common enemies that the player defeated while exploring Rule. This ensures that a balance is kept between how many enemies the player will need to fight and how much time they will have to peacefully explore the environment. 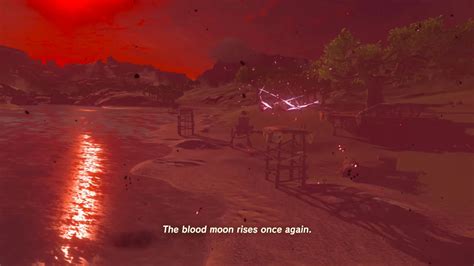 Routine revivals also offer the player additional chances to collect more items that enemies typically carry. If the enemies remained dead for too long, players would risk quickly running out of the finite resources they drop.

The gems, (such as rubies, sapphires, and Luminous Stones) typically reside in ore deposits, which the player must destroy to collect the precious resources. Swords, bows, shields, and other combat tools will eventually need to be replenished once the player has either broken too many of them thanks to Breath of the Wild's weapon stamina system or discarded them to make room in their inventories.

Travelling across a wide expanse of Rule causes the game to populate the regions with the monsters, animals, materials, foliage, and people that inhabit them. Defeating enemies and collecting weapons and materials are the primary ways to summon a Blood Moon, but the player can speed up this process if they explore multiple locations rather than staying in the same spots. 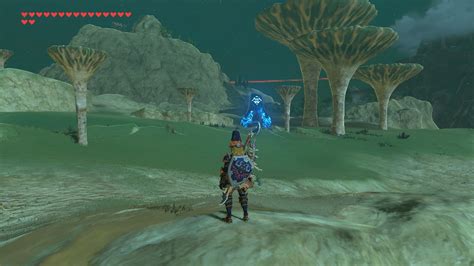 Making Link sleep past midnight moves the game clock forward, allowing the player to cause a Blood Moon while also avoiding stronger enemies. If they make Link sleep for too long, they can skip the Blood Moon hours accidentally and miss the chance to take advantage of them.

The Blood Moon ensures that the entire game refreshes itself, which needs to be done even if the player has not been consuming resources. A player could potentially prevent the Blood Moon from ever appearing if the game relied on them to first use a certain amount of memory.

As of now, the exact reason that the glitch happens is unknown, but the cause is commonly attributed to when the game faults and reads the in-game clock incorrectly. Unfortunately, this glitch can be very frustrating for players, as it can leave them in dangerous situations if they are in a location that was home to slain monsters.

When the memory becomes this full, the game needs to ignore the normal schedule time of midnight and instead perform the sequence immediately. The moon and skies turn red, and all enemies that you’ve defeated up to that point come back to life.

Now, Breath of the Wild takes a slightly similar route with the Moon playing a large role in being a pain in our behinds. While the Moon played the ticking clock element in Major’s Mask, here, it takes on a more “active” approach.

When the clock strikes midnight, the Moon and skies turn blood-red (obviously). Now, as scary and dramatic as the Blood Moon is presented in Breath of the Wild, the intent behind this mechanic is pretty clear.

Normally, enemies popping back in areas that you’ve cleaned out is just something gamers take in stride, in that “because video games” kind of way. Some items replicate this, like star fire fragments and dragon body parts, but they’re relatively hard to get, while the blood moon is a regular occurrence.

This is somewhat hampered by his belief that the golden age of gaming ended with the PlayStation One, but he doesn't let that stop him. Other interests are D'n'D, dad rock, complaining about movies, and being the self-appointed office funny man, which nobody else agrees with.