Interstate270 Dwight D. Eisenhower Highway Washington National Pike Existed1975–present Major junctions South end I-495 / MD 355 in Bethesda MD 28 in RockvilleI-370 in Gaithersburg North end I-70 / US 40 in Frederick LocationCounties Montgomery, Frederick Highway system MD 268MD 270 Interstate270 (I- 270) is a 34.70-mile (55.84 km) auxiliary Interstate Highway in the U.S. state of Maryland that travels between I-495 (the Capital Beltway) just north of Bethesda in Montgomery County and I-70 in the city of Frederick in Frederick County. 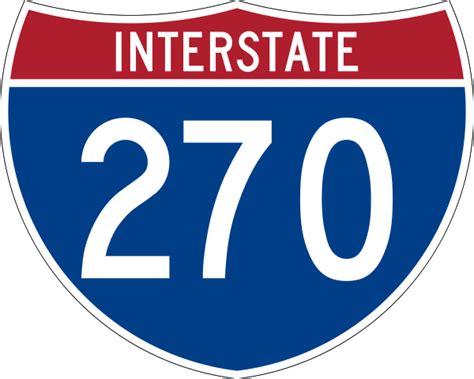 I- 270 is known as the Washington National Pike, and makes up the easternmost stretch of the Dwight D. Eisenhower Highway. Most of the southern part of the route in Montgomery County passes through suburban areas around Rockville and Gaithersburg that are home to many biotech firms.

North of the Gaithersburg area, the road continues through the northern part of Montgomery County, passing Germantown and Clarksburg as a six- to eight-lane highway with an HOV lane in the northbound direction only. The freeway was built between 1953 and 1960 as the Washington National Pike between Bethesda and Frederick and carried U.S. Route 240 (US 240), which was rerouted off what is now Maryland Route 355 (MD 355) between these two points.

With the creation of the Interstate Highway System a few years later, the road was designated as I-70S along with US 240. There were plans to extend I-70S to I-95 in Washington, D.C. on the North Central Freeway from the Capital Beltway; however, they were canceled in the 1970s due to opposition from residents in the freeway’s path.

Increasing traffic levels led to a $200 million widening of the road in Montgomery County to its current configuration. Many improvements are slated for I- 270, including the widening of the route that would add express toll lanes.

I- 270 northbound near the exit for Montrose Road in North Bethesda- 270 heads northwest from an interchange with I-495 (Capital Beltway) and MD 355 (Rockville Pike) in suburban Bethesda, Montgomery County as a six-lane freeway. At the southern terminus, I- 270 only has access to and from the eastbound direction of I-495. 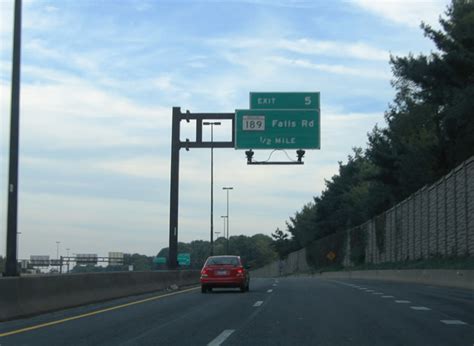 The road turns west and comes to an interchange with MD 187 (Old Georgetown Road) and Rock ledge Drive (unsigned MD 187B). From there, I- 270 continues west as a ten-lane freeway and merges with I- 270 Spur, which provides access to and from southbound I-495.

Past Montrose Road, I- 270 continues north into the Rockville area, turning northwest before it comes to a single-point urban interchange with MD 189 (Falls Road), where the highway sees 253,620 vehicles daily. The road continues to a modified cloverleaf interchange with MD 28 (Montgomery Avenue).

Past MD 28, the freeway passes numerous business parks and some wooded areas before coming to an interchange with Shady Grove Road. I- 270 northbound at the Middle brook Road exit in GermantownPast this interchange, I- 270 leaves Rockville and heads into Gaithersburg, where it intersects I-370.

This highway provides access to a park and ride lot at the Shady Grove station, which serves Washington Metro's Red Line, and MD 200 (Intercounty Connector), which heads east to I-95 in Laurel. I- 270 continues past more suburban development before coming to a northbound exit and southbound entrance with MD 117 (West Diamond Avenue). 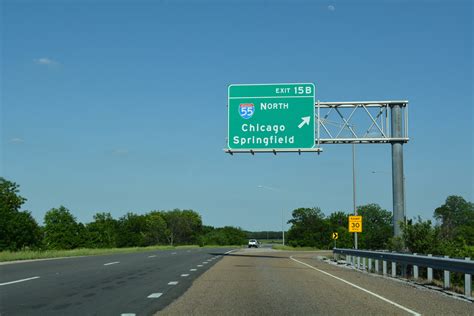 The median widens, with trees in the middle, and I- 270 has weigh stations on both sides. The highway reaches Pottstown, where it has an interchange with MD 109 (Old Hundred Road).

I- 270 northbound approaching Frederick short distance past the MD 109 interchange, I- 270 crosses into Frederick County, continuing northwest through rural woodland and farmland. It reaches the Urbana area, where the route has an interchange with MD 80 (Fingerboard Road).

The highway briefly runs along the east side of MD 80 past this interchange before continuing through agricultural areas. It features a scenic overlook in the northbound direction as the road passes through Monogamy National Battlefield, which was the site of the Battle of Monogamy Junction.

I- 270 eventually leaves the battlefield area and continues into the commercial outskirts of Frederick. Here, the road reaches an interchange with MD 85 (Buckeystown Pike) near the Francis Scott Key Mall.

The National Capital Park and Planning Commission agreed, and it approved the western route two years later. Further details about the routing were released in 1949, and construction began with the northern section in February 1950.

The extension to MD 118 in Germantown opened September 15, 1954. A group of people opposed any highway in Rockville because of the perceived increase in traffic, and the group had threatened to form a human chain in the middle of the freeway, but they did not carry through with their threat. 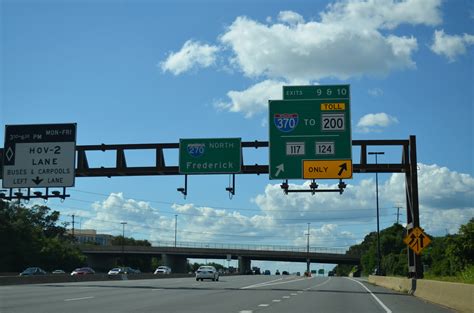 The Maryland State Roads Commission determined that a portion of Monroe Street in Rockville should be closed, in order to avoid building a costly overpass to continue the road to the west side of the new freeway. The Montgomery County Council had opposed the idea, but it ultimately withdrew its opposition because the federal government had agreed to add and pay for a freeway interchange with Montrose Road, which had not been in the freeway's original plan.

I- 270 Spur at split from southbound I- 270 in North Bethesda US 240 freeway was extended south to Montrose Road in December 1957. On December 17, 1958, the freeway extension to Old Georgetown Road opened.

By 1966, a route for the North Central Freeway was planned along a Baltimore & Ohio Railroad line running through the northeastern part of Washington and Tacoma Park north to the Capital Beltway. In a 1971 study by Delete, Cather Associates and Harry Jesse & Associates, LTD, I-70S was planned to run from its southern terminus at I-495 and run concurrent with that route before turning south on the North Central Freeway and ending at I-95 in Washington.

The routing of the freeway through residential areas of Washington drew opposition from residents of the Tacoma Park, Brook land, and Michigan Park neighborhoods who were successful in getting the freeway canceled through their neighborhoods in 1970. The North Central Freeway within Maryland was canceled by the MD SHA in 1972 due to opposition from officials in Montgomery County.

In 1975, the Federal Highway Administration officially approved withdrawal of plans to construct the road south of the Capital Beltway. Similar opposition also affected I-70 N's eastward extension into Baltimore proper, although a small part of its planned spur, I-170 (now US 40, as the freeway never connected to any other Interstate), was built and opened in 1979.

By the 1980s, traffic congestion had grown on I- 270 in Montgomery County; as a result, a $200 million project widened the road between I-495 and MD 118 to its current configuration, with some portions being widened to twelve lanes. This widening led to growth of residences and businesses along the- 270 corridor as far north as Germantown and increased traffic counts along the road.

This interchange connects the eastern and western portions of Watkins Mill Road by a new overpass. The exit provides better access to the Metropolitan Grove MARC station and Gaithersburg Medical Center.

The state of Maryland approved the $99.71 million project in July 2017 and construction began on July 11, 2017, with Governor Larry Hogan and County Executive Ike Legged in attendance for a groundbreaking ceremony. The project was completed on June 11, 2021, a month ahead of schedule.

View south along I- 270 at I-370 in Gaithersburg, at the north end of proposed HOT latest MD SHA is studying improvements for the- 270 corridor between Shady Grove Road and Frederick. Options for improvement include widening the highway to include more lanes with HOV and HOT lanes, as well as initiating rapid bus or light rail service along I- 270 between Shady Grove and Clarksburg.

In September 2017, Governor Larry Hogan announced a plan to widen the entire length of I- 270 by four lanes, adding express toll lanes to the median, as part of a $9 billion proposal to widen roads in Maryland. The project would be a public-private partnership with private companies responsible for constructing, operating, and maintaining the lanes.

On June 5, 2019, the Maryland Board of Public Works voted 2–1 in favor of the proposal to construct express toll lanes along I- 270, with Governor Hogan and State Comptroller Peter Franc hot voting for it and State Treasurer Nancy Opp voting against it. Interstate270 Publication Bethesda, Maryland Length2.10 mi (3.38 km) Interstate270 Spur (referred to as I-270Y by the MD SHA) is a 2.10-mile (3.38 km) spur off I- 270 that connects I- 270 and the Capital Beltway.

The road heads north from I-495 as a six-lane freeway with a 55 mph (89 km/h) speed limit. I- 270 Spur continues north through wooded suburban areas to an interchange with Democracy Boulevard adjacent to the Westfield Montgomery shopping mall.

^ “Major transportation milestones in the Baltimore region since 1940” (PDF). ^ “NC PPC Plan For Freeway From North Is Revealed: Details Announced For Highway From Montgomery Into District, Virginia”. 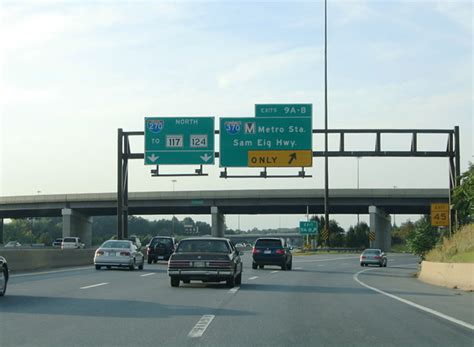 ^ “Hogan proposes $9B plan to add new lanes to Beltway, 270 and BY Parkway”. “Divided Maryland Board of Public Works OKs public-private partnership for highway expansion after explosive hearing”.