It Is A Wonderful World Lyrics

Song, “What a WonderfulWorld by Nat King Cole. Well, I’m scheduled to give a talk later this month at my church Sunday service.

It’s incurable but slow-growing and treatable, and thanks to a great oncologist, I’m currently enjoying a good quality of life. For me, my cancer has been a wake-up call and has given me an appreciation for life unlike I’d ever known in the past.

It’s likely that many of you know this song, but in case you don’t, go to YouTube and search for “What a WonderfulWorld Louis Armstrong” and you’ll be in for a real treat. Like my first arrangement, the process started by searching the Internet for the chords and lyrics.

“What A WonderfulWorld was performed by Louis Armstrong in the key of F, and that’s what I found on the Internet websites. After a while of some experimentation and transposing, I settled into the key of C. I decided that, as far as this lesson goes, I’d put my Capo on the fifth fret and my arrangement in C would actually be in Louis Armstrong’s F for those wanting to play along with his recording.

In case you’re not familiar with the tune, here’s the entire melody, written after closely listening to Louis Armstrong’s performance; and, giving credit where credit is due, playing that melody several times for my wife, Nancy, who has a great ear and the ability to say things to me like, “Hank, that note right there didn’t sound right”, or “I think you added an extra beat in there someplace”. “What A WonderfulWorld consists of a verse played a total of three times and a chorus.

[NOTE: What I’ve called the chorus throughout this lesson is actually a bridge. Thankfully he was kind enough to not insist that I make the necessary corrections in this lesson, which would have involved a lot of work.

So please forgive the misnomer and please keep in mind every time you read or hear the word “chorus”, it’s really the bridge that’s being referred to. Initially I began playing the chords in root position as taken from the Internet, and I have sung along.

As you can see, the first line has a descending bass movement from C to B to A to G. Similarly the second line bass notes move from D to C to B to A. There’s even a bit of ascending bass movement in the turnaround in the last line from C to E to F to G. As mentioned earlier, I’ve also incorporated most of the melody notes into the upper strings by carefully selecting the various chord voicing. The chord voicing do sound fine as written, and the vocalist will hopefully be hitting the melody notes properly.

Second, the open high E string that all four chords have in common is the melody note that is held for two measures and, in my mind, gives the very cool effect of a “pedal” tone. Because this song was arranged with a lot of attention to movement in the bass notes, this first sound file will be played by striking the bass note on the first beat followed by a down stroke on the second beat.

I will try to end those down strokes on the melody note, but again if I miss one here or there it won’t make that much difference. As long as the notes strummed are part of the chord, they’ll sound fine.

A few words about the chorus: The G chord in the first two lines is voiced so that the D melody note is included on the second string. If you are intent on emphasizing that melody note, simply avoid playing the first string.

Let’s keep things simple for a moment and listen to the chorus strummed without the “Blackbird” lick: At the very end of the chorus, one thing you’ll hear me do on the Dm7/A chord is to actually play the melody to “I love you”.

In my opinion, it’s a good idea to play the melody note of the very last three chords (the ending) properly. The final C chord that accompanies the “yeah!” can be played normally and held for four beats since that very last melody note is on the open E of the first string.

Just to mix things up a bit, I’m playing this verse using my thumb to strum the chords. As tempting as it might be to call it quits here, to make this song really sound professional, it really needs an “intro”.

I wanted some type of instrumental “intro” that would make a nice transition into the vocals. And, as an added bonus, here’s my humble attempt at playing “What A WonderfulWorld in its entirety. 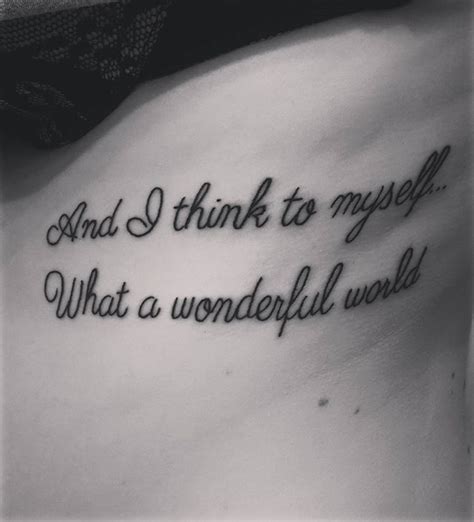 This time through I’ll be playing the “intro” and verses finger style. In closing, I just want to repeat what I said at the end of my previous lesson, that arranging this tune was has taken a lot of time and effort, but again it was well worth it.

By Stacie Marshall 'What a Beautiful Name' by Hill song Worship is one of our viewers' favorite modern praise songs! Read on to learn the lyrics to this beautiful modern hymn and find out the story behind the song.

This beautiful modern hymn by Hill song Worship is so emotional as it praises our Lord and Savior Jesus Christ! As this hymn shows, even the mere mention of His name brings thankfulness and wonder at His love for us.

Ben Fielding wrote the melody for 'What a Beautiful Name' with lyricist Brooke Ligertwood (maiden name Fraser) shared how it was very important to him for the songs he sings in the church to be grounded in scripture. The mysteries of our infinitely beautiful and glorious God, once hidden for generations, have now been revealed through Jesus (Col 1:26).

In this video on YouTube, you can hear Brooke perform an acoustic version the song herself. And then 4 minutes into the video, hear an interview her about the songwriter's inspiration for the emotional lyrics.

In the long months leading up to having a newborn, parents work hard to prepare their homes and hearts for their babies. Of course, that can be extremely difficult, so when we see evidence of these lessons sinking in, we can’t help but feel the love.

Reddit In one of the sweetest viral videos we’ve ever had the pleasure of viewing, we meet a little boy whose parents clearly taught him a thing or two about being a big brother. Cradling the infant (who is absolutely adorable swaddled in a soft pink blanket), he stares down at her with such obvious love and tenderness.

The words are so wistful and full of hope, and when we hear them whispered in this toddler’s voice, our hearts burst wide open. Yes, we know infants take time to develop their “social smiles,” but the adoring way she gazes up at him cannot be a coincidence.